Submitted to an anthology, this short story, completed in November 2002, didn’t make the final cut. Like the excerpt from “Walk Upon the Waters” posted on July 30, this is another post-comic book Arion Lord of Atlantis story (the names have been changed, of course). The premise here takes the sword & sorcery conceit of the reincarnated warrior and, I hope, turns it on its ear a bit. Here ar the first 1,000 words or so: 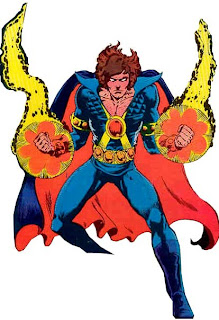 “Passed Lives”
© Paul Kupperberg
Arion Lord of Atlantis © DC Comics
As Malasa brought the blade down on the creature’s neck, darkness began to nibble away at the sun. The chicken’s brief squawk of fear was cut short in the blur of blood from its severed neck, its taut feathered body struggling in her grasp even as its startled eyed head bounced to the dusty ground. Malasa had turned her head to the sky, averting her eyes from the splash of blood, when she saw the wedge of blackness beginning to creep across the face of the sun.

She peered through squinted lids, sure her eyes were somehow deceiving her. The sun, giver of all light and warmth, surely it could not be going dark, not now. It was late morning, the sun barely midway through its daily journey across the sky while Malasa and her family attended to chores on their small farm outside the edge of the City of the Stars. Her husband, Khar, the smith, was nearby in his shed, patiently heating the head of an axe in need of repair in his blazing hearth. Their two youngest, the bulk of their little herd having moved on in marriage or apprenticeship, Shartra and Vannga sat in the shade of the house’s overhanging roof, chattering away as they mended bedding with large needles and coarse thread.

The barrel-chested, dark-bearded Khar dropped his long-handled tongs, losing the damaged axe head in the fire. “By Crghas,” he breathed. The crust of darkness at the sun’s western edge had notched deeper into the otherwise blazing orb, moving slug-like, almost imperceptibly, to the east. It was no illusion, else it be one shared by them all.

Vannga, Malasa’s baby, put aside her needle and crossed to where her mother stood, the lifeless fowl now racing away its last moments of existence unnoticed in circles at her feet. “Mama?” the auburn haired eight year old said, slipping into her mother’s arms.

Malasa looked to Khar, but the burly blacksmith was no help, a gape-jawed and glassy-eyed witness to the death of the sun.

“I don’t,” Malasa started to say and then she stopped. Her hand on her frightened child’s face, she looked at the rapidly dwindling sun in the darkening sky. She knew something about this, she realized with a start. It was as a name known but, for the moment, unremembered. But what could she, an old woman, mother of many, have ever known, could have forgotten, about such things?

Then, she said, in a calm voice to reassure the trembling child, “It’s called an eclipse, Vannga. It is merely the shadow of the moon falling upon a vastly more distant sun.” She stroked Vannga’s face. “There’s nothing to be afraid of.”

Malasa turned her gaze his way. “I said it’s an eclipse. It will be over in a few minutes. It isn’t a sign or a portent. It’s harmless.” She smiled, but she was confused.

Khar pointed a trembling finger to the sky. “That is the maw of the Dark Gods, devouring the sun,” he cried. Rooted to her seat with fear, Shartra erupted in tears.

“Oh, don’t be such an ass, Khar,” Malasa scolded. “You’re scaring the children.”

Khar’s face was turning scarlet, his eyes bulging. One quarter of the sun had been consumed by darkness. “Why shouldn’t they fear, woman? The world is coming to an end,” he rasped.

Malasa made a sound of disgust and, taking Vannga’s hand, stomped towards the house. “Then pray or repent or whatever you need do, Khar. And when you’re done being a fool...” she pointed at the carcass of the chicken, finally spent and sprawled twitching on the ground. “Bring in your dinner.”

Malasa hurried Vannga into the house, then hustled the crying Shartra in behind her. She closed the door, then stood with her back pressed against it for several minutes, her eyes squeezed shut. How in the name of the Darkness had this knowledge come to her?

She did not know.

And then she did.

A startled, boisterous laugh exploded from Malasa. Her daughters stood watching her, frightened and confused. No doubt they thought the sight of the vanishing sun had driven away her sanity. And who was Malasa to say they were wrong? She had gone, in the drawing of a breathe, from their sturdy, reliable mother to a baying clown, wracked with laughter even as doom spread its dark fingers over Atlantis. This thought struck her as funnier still. It was but an eclipse, a naturally occurring phenomenon with no more meaning than a hand passing in front of the flame of a candle. And yet to the peasants who labored in the fields of the City of the Stars, it was as if the Dreamer herself had appeared before them to accompany them over into the Darkness.

“Mama, what is it? What’s so funny?” eleven year old Shartra said, her voice quivering, her face wet with tears.

Malasa fought to regain her composure, knowing her behavior was more frightening to the children than the blackening sun. But it had been such a long time. She had lived half of someone else’s life...

And, oh gods, had she really called poor Khar an ass and a fool? She put a hand over her mouth and tried suppressing a renewal of convulsive laughter. Malasa, wed to the smith Khar since she was little more than a girl herself, with near thirty years of marriage and eleven children between them, would never have spoken to her husband in such a disrespectful manner.

But Kahna, warrior priestess of the City of the Archer...she would have no such prohibition.
Posted by Paul Kupperberg at 7:15 AM