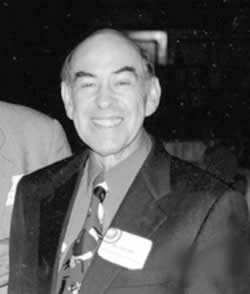 I just learned that long-time comic book and animation artist Ric Estrada lost his battle with cancer and died May 1 at the age of 81.

Ric was one hell of an artist, possessing an easy, loose style reminiscent of Harvey Kurtzman at the height of his prowess on the EC war comics...which, incidentally, Ric contributed to in the early 1950s. He was born in Cuba, made his first art sale at the age of 13, went to the University of Havana with Fidel Castro and was encouraged to move to New York to pursue his art by family friend Ernest Hemingway. Ric did the bulk of his work for DC Comics in the romance and war comics of the 50s and 60s and, in the 70s, provided pencils or layouts for such superhero mainstays as All-Star Comics, Freedom Fighters and Karate Kid.

I met Ric in the mid-70s. I was a newbie writer and sometimes-staffer in those days, back when DC still kept a room (or at least a space with a couple of drawing boards) for artists to sit and work when they were up in the offices at 75 Rockefeller Center. Ric would sometimes make use of one of those boards and I would hang out there with him and some of the other semi-regulars like Tex Blaisdell and Bill Draut and talk for hours at a stretch. Well, really, they would talk and I would sit there, drooling fanboy that I was (am) and listen to their stories.

Ric Estrada was, quite simply, one of the nicest people you could ever hope to meet. Not only did I never hear a negative word cross his lips, but, in an industry full of catty talk and gossip, I also never heard a negative word about him. He was, quite simply, a good guy. You can find out more about this remarkable man here and here. I'm just going to let his work speak for him in the form of a 5-page story he drew from a script I wrote that appeared in Weird War Tales #83 (January 1980). As always, click on images to view in a readable size: 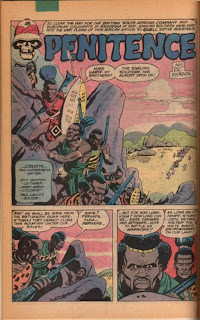 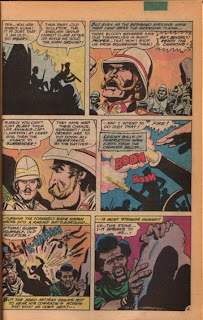 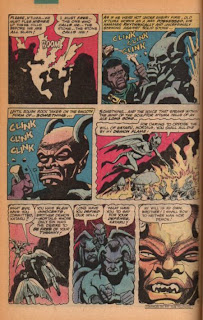 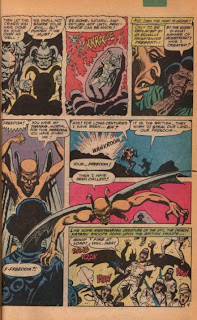 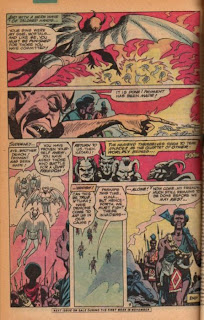 While this page is usually filled with stuff about me, I'm not the only one with an artistic bent in my household. My son, just turned 13 and a Bar Mitzvah this Sunday past, is a talented (if I do say so myself) drummer, who sat in for several numbers with the jazz quartet we had playing at his party. Here's 3 minutes of crappy digital camera video of him doing his thing on "How High the Moon":

Me? Proud? Whatever gave you that idea?
Posted by Paul Kupperberg at 2:50 PM No comments:

This was one of the stranger little jobs I did while working in DC's Creative Services department, around 2000-2003: A 4-page JUSTICE LEAGUE animated mini-comic created out of style guide art to be in-packed with SILLY PUTTY. See, back in the olden days, you could press SILLY PUTTY against a (letterpress) printed image, like a comic book page or a newspaper and a mirror-image of that image would be picked up by the putty. With comics now printed photo offset, that trick doesn't work, so the Putty-people had us create this letterpress comic, which I cobbled together. Click on the images to see them in a readable size: 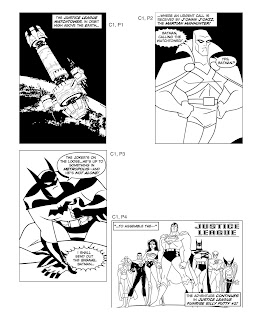 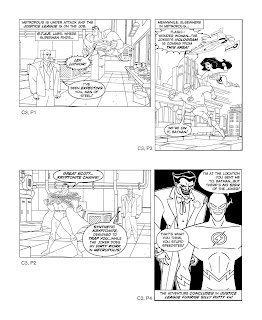 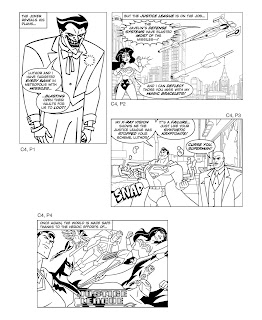 With this, that and the other thing lately, I haven't had the time (or energy) to tend to this page and to other things as well, including my (usually) bi-weekly Bookgasm.com column, Capes, Cowls & Costumes. I'm trying to schlep myself back on track, beginning with "Rated X," a look at just a few of the three dozen-plus X-Men novels and anthologies that have seen print. 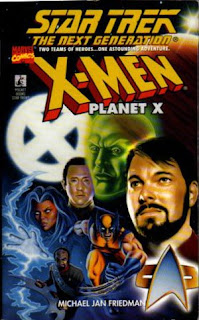 Posted by Paul Kupperberg at 6:31 AM No comments: