Before I killed Miss Grundy, Before I Killed Adrian Chase... 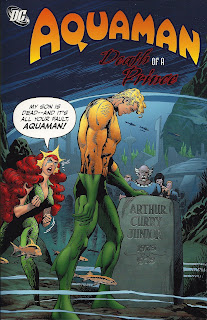 I just received in the mail my comp copies of the new Aquaman: Death of a Prince trade paperback from DC Comics. It features the entire saga of the birth and death of Arthur Curry Jr., aka Aquababy between 1974 and 1978.

I was assigned to write Aquaman after having written two different back-up features, one starring Aqualad (Adventure Comics #453 - 455), and another featuring Mera's search for the missing baby in Aquaman #57 - 59. My first issue was Aquaman #62 (June-July 1978). My last was #63 (Sept.-Oct. 1978), whereupon the title was cancelled. But that issue did wrap up the whole storyline and I did get to rack up my first comic book fatality. Plus write the character for a few more stories when the Aquaman featured jumped over to the new, giant-sized Dollar Comics format.

I'll be a guest at the Scranton Comic Book Convention in (where else?) Scranton, PA this coming Sunday, June 12! This will be my first time attending, but it look to be a good old-fashioned one-day local show and I'm looking forward to it.

Buy My Books On Amazon.com...Pretty Please?!?

Well, okay, not exactly starving. But I am feeling rather peckish...

Posted by Paul Kupperberg at 6:16 AM No comments: