Here's the first half of the first chapter of a silly science-fiction young adult book I was playing with several years back. The rest of the chapter tomorrow: 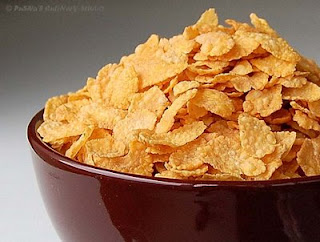 chapter one
"I am in deeep trouble!"

Merlin Barnstorm Noble Gleeznak Riboflavin Shakespeare Krebbs had a lot of reasons for making what was probably one of the all time biggest understatements to ever be uttered in Known Space. Considering the number of inhabited planets and the width and breath of their locations across the cosmos, that was quite an understatement indeed. But the enormity of his comment was the last thing on Merlin’s mind. He was way more concerned with the reasons for it. Like, for instance:

He was trapped in the hold of a robot cargo ship filled with one hundred thousand metric tons of corn flakes.

A robot cargo ship that was locked on a collision course with Riggit-14, the star around which his home planet, Riboflavin, orbited.

A collision course that, even if he could break out of the hold, was the very purpose for which the ship had been built.

A purpose which meant that the ship was built without any controls he might get to in order to override the auto-pilot.

And even if there were any controls capable of overriding the auto-pilot, Merlin, at fourteen years old and with no experience at piloting anything more complicated than his duocycle through the streets of Flaketown-4, wouldn’t have been able to figure out how to operate them.

In other words, Merlin was in deeep trouble.

Which, unfortunately, seemed to be the story of his life.

Starting with his having been born on what was probably the worst planet in the whole Known Universe, Riboflavin. The corn flake planet. The forgotten corn flake planet. A planet Merlin hated more than even homework. He knew, of course, that there were other planets in the universe, including Earth, from which the ancestors of everyone on Riboflavin had migrated over six hundred Terran Standard Years ago. To make corn flakes. But he was willing to bet his entire collection of magno-ball cards that none of them were as boring, as totally and completely devoid of anything of any interest whatsoever as Riboflavin.

Where all anybody did was make corn flakes.

Come to think of it, Merlin hated corn flakes more than even homework. And Riboflavin.

But, right now, Merlin would have eaten a whole truckload of corn flakes and done a whole school years worth of homework on Riboflavin just to be off this ship and back home with his parents.

Merlin groaned and slapped his head as he thought of his mom and dad. “They’re gonna kill me,” he moaned.

Which was, of course, silly. Merlin was shortly going to be dead and incinerated in the fiery heart of Riggit-14 and therefore well out of the murderous reach of his parents.

to be continued...
Posted by Paul Kupperberg at 7:04 AM