From the annals of the late, lamented Weekly World News, a Global Warning-like story from February 2007: 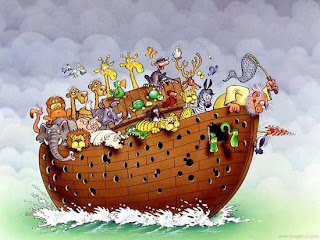 THE NEXT GREAT FLOOD! Modern-Day ‘Noah’ Warns Threat Will Be of Biblical Proportions!
© respective copyright holders

Washburn, Colo. – Since he was a child, whenever storm clouds would gather over the Rocky Mountains, Dr. Warren Soakes would take a moment from his work to gaze at the natural wonder. Now, the forty year-old meteorologist stops whatever he’s doing to make a quick, worried scan of the skies – and to listen.

“It’s coming,” Dr. Soakes warned Weekly World News. “Due to the effects of global warming, there’s absolutely no doubt in my mind that a flood as bad or even worse than the Biblical flood will wipe out all life on Earth sometime in the next six months! It will be a combination of rain and rising sea levels creating perfect flood conditions.

“But unlike the first flood, this will be an act of man, not God!”

Nor is Warren Soakes a crazed voice crying doom on a street corner. He is one of the country’s leading climatologists, a respected scientist who, until last month, was director of the Pacific Region Climate and Oceanographic Institute.

“Between the melting polar ice caps and the el nino-based shifts in climate that caused this winter’s brutal snow storms across the heart of America, it’s just a matter of time before the deluge comes,” Dr. Soakes said.

While no one can argue that global warning is real, Dr. Soakes and his colleagues remain at odds over exactly how severe the condition is and when its effects will be felt.

“Dr. Soakes has gotten a bit carried away with his estimates,” said the current director of the P.R.C.O.I., Dr. Shiela Lemech. “While a global-wide flood is theoretically possible at some point in the future, it’s certainly nothing to worry about right now. Certainly we have time to reverse the warming trend before we have anything cataclysmic to worry about.”

But Dr. Soakes stands by his predictions, which are based less on advanced computer models than on common sense.

“We’re trying to fit billions of gallons of newly-melted ice in a container that isn’t large enough to handle it,” he said, referring to the ocean. “I’ve tried convincing the rest of the scientific community but they refuse to listen. Something’s got to be done, and I’m going to do it myself!”

“There really aren’t a whole lot of models to work from based on the scenario of the world being flooded,” he said, “so I went to the source for my inspiration: the Biblical story of Noah and his ark.”

Dr. Soakes’s ark will be considerably more high-tech than was Noah’s ark.

“Thank goodness I don’t have to build the whole thing from scratch,” he said. “I’m starting with a military surplus destroyer that I picked up last month at a Pentagon auction. I cashed in my IRA to buy it. Who needs savings when there won’t be anywhere to spend it? The Navy was selling it for scrap metal, but with a few patches and a new engine, this baby will be perfect for riding out the flood, no matter how deep the water gets!”

Not unlike the scientific community, Dr. Soakes’s neighbors are more than a little skeptical about his new project.

“The doc’s always been a great neighbor,” said retired sanitation worker Hyram Stenich. “But then he had that boat trucked into his backyard and it’s been nothing but construction noise and foul stenches ever since. It smells like he’s keeping a zoo in his garage.”

In fact, Dr. Soakes and his sons, Sam, Joseph, and Hamilton, have moved the family car from the garage in favor of the host of animals he plans to bring with them on the ark.

“I don’t have room for elephants and hippos,” he said, “but we’ve got the basics -- dogs, cats, cows, chickens, goats, horses, mice, hamsters, and one alpaca. If you hear of anyone with a female alpaca for sale, let me know.