On August 8, I ran the first segment of an unpublished short story from 2002, “Passed Lives.” Here’s some more: 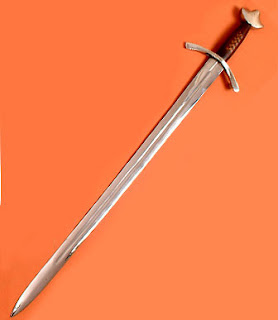 “Passed Lives”
© Paul Kupperberg
The blackness slid across the face of the sun and, as Malasa had promised, emerged whole and unchanged at the end. Khar had fallen to his knees, spending the next hour of the day that became night in prayer to Atlannis and any other deity he thought might be open to hearing his pleas of salvation for himself and his family.

Malasa watched him through the window after, at last, stifling her laughter and finding the words to comfort and calm the children. The moment had passed, her awakening leaving her both unsettled and strangely calmed, as though the forty-seven years of this life had been something she had only imagined, a brief interruption in reality. But that was not true. Khar, this house, the fourteen children she had birthed, the three she had buried before their first years had passed, her life up to this instant...hardly an hallucination.

She set the children to preparing fresh bread for their supper. Ordinarily, they baked only once a week, on the eve of the resting day, but she wanted to distract them from the waning sun. Khar seemed rooted to the ground, unwilling to cease his prayers until he either believed the danger had passed or he found himself face-to-face with the gods.

...Malasa could no more deny the life she lead than she could the one, from so long ago, that the sight of the eclipsing sun had awakened. She remembered them both, vividly, the details of whichever one her mind happened to light upon the more strongly remembered, until memory leapt from the one back to the other. She was Kahna, the tenth generation warrior priestess of the Emerald Temple of the City of the Archer. She was Malasa, wife of Khar of the City of the Stars. She had lived as the former many centuries past. She lived now as the latter. And now, suddenly, after the passage of too many years, that previous existence had come back to her, whole and fully remembered as though she lived it still.

“Why now?” Malasa whispered as the last vestige of darkness slipped away from the sun and the day became whole again.

In a dark corner of her mind, in the part that was now Kahna, she believed she knew and that knowledge made her shudder.

* * *
In the night, with the house’s great room glowing in near light from the banked embers in the hearth, Khar stirred in bed and whispered her name.

“Yes, Khar?” she said, quiet so that the girls were not awakened.

“How did you know?” he asked in a tone that said he was not accustomed to his wife knowing what he did not.

“How did I know what?” she answered, pretending to have been awoken from a sound sleep. Malasa could scarce breathe, having waited all day for him to ask this question, knowing there was no sane answer she could give him.
“
About the sun,” he said.

Malasa moved her shoulders. “I didn’t,” she said. “I lied, so the children wouldn’t be frightened.”

His voice came softly out of the darkness. “No,” he said. “No, you didn’t. I know you, Malasa. After a lifetime together, I can read your every tone. You spoke the truth.”

“I thought we were doomed,” Khar said. He shifted in bed, pressing his body against hers. She could smell the smoke and tang of metal that clung to him no matter well how he scrubbed himself clean every night. He pushed aside her long hair, auburn streaked with gray, and kissed the back of her neck. “I was scared,” he said in strangled voice. “To lose you.” Another kiss. “Our children.” His hand crept up her hip.

“No, Khar,” she said without moving. “Please, not tonight.”

Khar was silent, then said, “You’ve never denied me before, Malasa.”

Malasa drew the heavy wool cover to her chin, her eyes wide open and staring at something that was not in the room.

“I can’t tonight, just not tonight, Khar,” she whispered.

Khar exhaled heavily and withdrew to his side of the bed. “Sleep well, Malasa,” he said.

“Sleep well,” she said. But Malasa was sure there would be no sleep for her. She had much to think upon now that it was dark and quiet and she could be alone with her thoughts. She could think about what it was to be Kahna, to be Malasa, two women sharing a single mind. To wonder why, in the eclipsed light of the noonday sun she was suddenly made to know that hers was Kahna’s soul reborn. And how, in the name of Crghas and the Darkness, she would ever explain it to Khar and the children.

And most troubling of all, the matter that had her wracked with guilt, shivering with longing. How was she to find Thalis? And what he would see when Kahna stood before him, old and worn to a gray tatter by Malasa’s life?

What would he see, the lover she had last seen so many centuries ago?

* * *
The day after the eclipse, the priests proclaimed a time of prayer and meditation. Malasa, like the rest of the citizens of the City ignored them and went about their business. Perhaps a priest or a nobleman might spare a day to commune with unhearing gods, but she could not. Khar did not speak of the previous day, but Malasa caught him casting furrow-browed looks in her direction all morning. Shartra and Vannga spent their time in the corner or across the yard from their mother, watching her and whispering to one another.

After the midday meal, Malasa could stand it no more.

She stood in the door of Khar’s smithing shack. “I am going to the City,” she told him.

She shrugged. “There is bread and meat for your evening meal. I’ll stay the night at an inn and return in the morning.”

Khar’s frown deepened, a black smudge across his sweat and soot stained forehead. “Malasa,” he started to say.

She looked at him, Malasa loving her husband of thirty years, Kahna not knowing him at all. “I will be home tomorrow, Khar,” she said. She turned and began walking away. She stopped and without turning back to look at him added, “I promise.”

Then she was gone. A little while later, Khar heard the sound of hoofs clattering across the yard, then fading as his wife rode away, out of all hearing and sight.
Posted by Paul Kupperberg at 7:09 AM