He Loves Peace So Much, He's Willing to Kill For It...And He's Downloadable, Too! 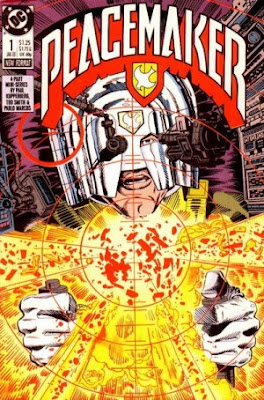 Waaay back in 1988 I wrote a miniseries for DC Comics starring the Joe Gill/Pat Boyette-created character, Peacemaker. Peacemaker was originally published by Charlton Comics in 1966 as part of editor Dick Giordano's "Action Hero Line" and lasted only a couple of years. Years later, DC acquired the rights to the Charlton Comics heroes (nearly losing them to Alan Moore's whim in the 1980s, had his Watchmen gone as originally conceived), and I have managed, happily, to be involved with many of these characters over the year as both writer and editor.


I got my shot at Peacemaker in the pages of Vigilante, where he was portrayed as a dangerous psycho who listened to the voices of the people he had killed who spoke to him via his helmet. In 1988, I spun him off in the aforementioned miniseries (with artists Tod Smith and Pablo Marcos), which was a total psychotic, blood-spattered romp against international terrorism. The voice in his head/helmet now belonged to his deceased and unrepentant Nazi father, and my editor's marching orders to me had been to push the envelope on crazy and violent.

DC has just posted the entire 4-issue Peacemaker miniseries online for download at .99¢ each via it's DC Comics app for the iPhone and Android devices, as well as at Comixology.com.

It was, someone in DC Digital told me the other day, sick enough that it was "a book that had to wait for the market sensibility to catch up with it."

Not shabby for a guy who writes Archie and Scooby Doo, huh? 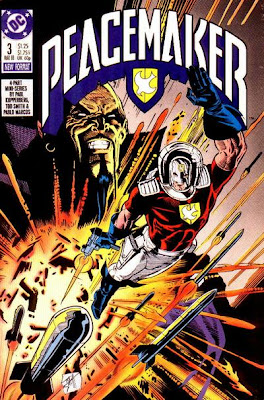 Posted by Paul Kupperberg at 8:16 AM No comments: 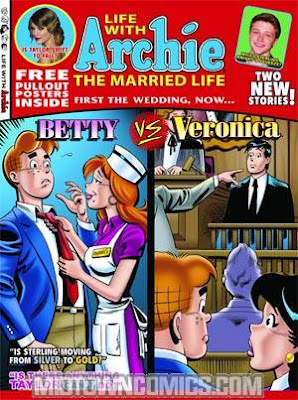 Posted by Paul Kupperberg at 7:40 AM No comments:

The new novel by the author of Two Tales of Atlantis and In My Shorts: Hitler's Bellhop and Other Stories.
Click on the cover image to order The Same Old Story from Smashwords.com! 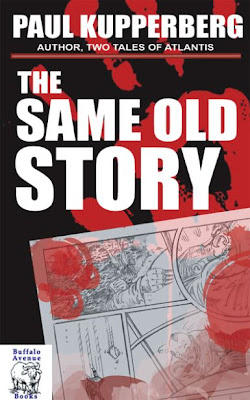 eBook Price: $4.99 USD. 78,290 words. Fiction by Paul Kupperberg, published by Buffalo Avenue Books on Smashwords.com on May 18, 2011.
It's 1951 and the comic book industry is undergoing a recession that's sent half the writers and artists in New York to the streets scrambling for the work that remains. Among that number is writer Max Wiser, former pulp scribe and son of a legendary N.Y.P.D. homicide cop, on whose life Wiser based his bestselling pulp stories. When the industry's top writer dies in an accidental drunken tumble from a subway train that proves to have been murder, Max is plunged into a world of lies and conspiracy...discovering that there is often a fine line between real life and the pulp fiction around which he has built his life. Especially after the beautiful blonde mistress of the murdered man works her way into his life...and as the death toll mounts, Max Wiser learns that even in the cliche-ridden world of comics and the pulps, there's really no such thing as The Same Old Story...
Posted by Paul Kupperberg at 5:52 AM No comments: