My hard drive is full of bits and pieces of incomplete stories, novels, characters, bits and ideas. Some of them will never go anywhere, some will wind up cannibalized and used elsewhere, and others are far enough along that I really have no excuse not to do something with them...like, maybe, finish them. One of the latter is The Same Old Story, a mystery set in the early 1950s world of the comic book industry from which I ran an excerpt on August 2 (containing my beloved Pincus the ribbon salesman joke). I had about 21,000 words written on the book, eleven or twelve chapters, and a pretty solid idea where the story was going, but I hadn’t touched the thing in more than a year.

It occurred to me that if I’d written even 500 words a day on it during that year, the book would have been finished months ago...as would a second book, with a third one in progress. Five hundred words a day, even on top of regular schedule of paying work, is no great strain. So on August 16, I sat down to inaugurate a 500-words a day regiment aimed at finishing this novel in the course of the next three to four months; I ended up totaling 1,200 words that first day and between 600-800 words each day since. These are those first 1,200: 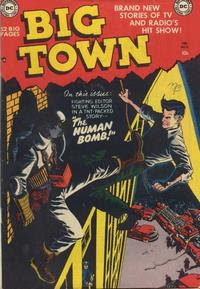 THE SAME OLD STORY
THE SAME OLD STORY © Paul Kupperberg
BIG TOWN © the respective copyright holders
Chapter 8/BIG TOWN
It was after lunch by the time I got back to Brooklyn, so I took the cold brisket on rye mom had left for me and a mug of reheated coffee into my room and ate while I got to work. I’d spent so much time during the week looking for work, I’d hardly gotten anything done on the assignments I already had. First up were the Big Town story pitches for Schwartz at National. Since I’d practically grown up listening to the radio program, I was pretty much up to speed on the relationship of newspaper editor Steve Wilson and his gal pal Ona Munson, but I read through the issues of the comic book I’d been given anyway. I was guessing there was a formula of some sort that the writers followed, just like the program it was based on could be counted on to tell its stories in a certain way.

It took me all of two stories to get the formula, which wasn’t really much different from every other crime comic on the racks. Introduce your characters, throw a criminal plot in their path, take them through a couple of twists and turns that winds up with them facing the wrong end of a gun or hanging from the face of a building, than provide an incredible last-second save based on their knowing something the bad guy did not or some slip-up on the villain’s part. I jotted some notes as I read; crimes with interesting twists, compelling bad guys, a few death traps, some obscure forensics trivia. From what I had heard and could read for myself, Schwartz was a gimmick-guy. He loved a great bit, a twist, preferably based on some scientific or historic fact, always fairly introduced somewhere in the story. “That so-called jungle orchard in your hothouse produces the chemical surgeons use to paralyze and immobilize their patients on the operating table!” Writers I knew who worked with him said he was a challenge, always twisting the story out from under you, taking the rough lump of your idea and polishing it until it glistened with all the facets of what he thought this type of story needed. It also made me understand Al Roth’s comments about how they wanted him to draw like “everyone else.” Everyone wrote like everyone else, at least on their crime books. Everyone was squeaky clean, even the cartoon gangsters pulling outlandish crimes too incredible to be taken seriously by even those brain dead hotheads talking censorship in Washington.

But, as my grandfather, Chiam the peddler, liked to say, “You sell what people are buying.” It used to be I was selling pulp stories. Right now it was crime comics, but look where that was going. The 25¢ paperback was looking good as the next big thing; all I needed was a solid novel to peddle to one of the publishing houses, not that I had the time to work on something like that. Whenever I sat down at my desk, and I spent an awful lot of time parked there, it was to work on a paying job. I was too busy scrambling to pay the rent and have something resembling a life to concentrate on anything like a novel on spec. Sooner or later, though, I’ll have to do it. Better I should be writing it now, two, three, even five hundred words a day, than start sweating it out with no time to do anything good...

Except that was just my mind trying to divert my attention from what I should be doing, procrastinating at the thought of having to tackle something new like the Big Town stories. The hypothetical novel would have to wait, at least until I was caught up with my story outlines and scripts.

I rolled a sandwich of carbon paper between two sheets of white bond into my trusty old Underwood Noiseless Portable 77 and started typing. I figured I would come up with six or eight springboards, jumping off points for stories that Mr. Schwartz and I could mold and shape together in reasoned dialog. Why spend all the time to construct tight little eight-page mysteries that will unravel at his first change anyway? I was willing to go in, offer him the raw material with which to build a story he was comfortable with then work with him to finish as something we both can live with.

The act of typing was enough to raise my confidence. I always figured I could write anything...I just needed to get to it and put the actual words down on paper. Typing meant I’d gotten to it, on the same typewriter I’d been getting to it on since 1937. I don’t know how many hundreds of thousands or even millions of words I’d logged on that old Underwood. The E, S, and RETURN keys were practically worn out and the bell that rang at the end of each line was starting to sound a bit tinny, but we worked well together. I wasn’t a fast typist, poking away at a reasonable speed, about as fast as I know what the next word is going to be, so the keys never jammed on me and were always just the right amount of springy under my fingers.

I’d paid Mr. Baum at the pawn shop on St. John’s Place $13.50 for the Underwood in 1937. Or maybe it was more accurate to say I rented the sleek black machine from him for 5¢ a week for over three years until I’d paid him his asking price. Mr. Baum had seen me wandering past the store several times a day for almost two weeks, pausing to stare forlornly at that machine before moving on. One day, he happened to be outside sweeping the sidewalk when I came by and he and his broom joined me at the window.

“I know, but that’s how everybody else talks so I do too.”

“So, this typewriter. What’s so special about it?”

I nodded. “Well, I will be when I get a typewriter. Right now, I write everything on nickel tablets, but that’s just until I can get a real typewriter. All the real writers use them.”

“I’ll tell you what. Since I too would like to see you become a real writer, and because I know your father, I can let you take this magnificent machine home on a special time payment program of one nickel a week, when you got it. When you don’t, you come sweep up the sidewalk or the floor inside, do some errands, you’ll work it off. And if after a few weeks you decide you don’t want to keep it, I’ll give you a…”

“That’s okay, Mr. Baum, that won’t happen. This is a final sale.” I stuck out my hand and shook on the deal with Mr. Baum before he could change his mind. With extra hours on weekends, I owned the Underwood outright in three years and I let Mr. Baum read everything I wrote with it. He called that collecting interest payments on the loan.
Posted by Paul Kupperberg at 7:10 AM