I finished this novel in July 2005 and it was due to be published sometime in 2006 by iBooks. The sudden death of iBooks publisher Byron Preiss caused a whole chain reaction of events that resulted in bankruptcy for iBooks and the cancellation of this—and many other—books. DC is currently in negotiations with the new owner of iBooks and there is some hope that JSA: Ragnarok will be resurrected and published...indeed, that it will even be followed by two more novels to complete what was originally planned as a trilogy.

In this excerpt, taken from the last chunk of the book, Michael Holt, aka Justice Society of American chairman Mister Terrific, is, along with his teammates, in the clutches of the bad guys and things don’t look good for them. Michael’s remembering back to his pre-superhero days, to the last time he let himself get distracted: 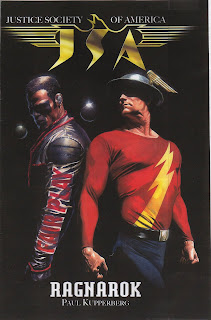 JSA: RAGNAROK
JSA and all related characters and elements © DC Comics
The 400 meter was the last event of the first day of the decathlon and Michael Holt felt nothing but good about his chances. The 400 was his event. He had already taken the 100 meter, the long jump, the shot put, and high jump, breaking one personal best and three Olympic records in the doing. He was well ahead in points and the odds-on favorite to take the gold. The whole stadium seemed to be on his side as he took his place at the starting line.

The closest thing he had to competition was the Kenyan, a whippet thin young man with densely corded muscles and deadly serious expression, currently in second place. He had gone over to shake the other man’s hand and wish him luck before the race, but instead of being a gentleman about it, the Kenyan had instead given him only the most perfunctory of handshakes and then turned his back on Michael.

If that didn’t call for some serious butt kicking, Michael didn’t know what did. He glanced over at his competitor, but the other man had his eyes fixed on the tape, 400 meters, just a shade under 361 feet down the track. The Kenyan was giving away nothing. He had to know he was up against a superior athlete. Any other year, he would have been a cinch for the gold medal. Just his luck to qualify the same year as the one competitor in the world who outclassed him.

Michael took his position, steadying his breathing. Out of the corner of his eye, he watched the Kenyan. The Kenyan ignored him. He only had eyes for the finish line. Too bad Michael’s back was about to block his view.

The starting gun barked and the runners pushed off.

Michael Holt sailed into an easy lead, legs and arms pumping in perfect rhythm, breathing in through his nose, out through his mouth. Every bit of technique he had ever learned and had trained into himself so deeply that it was as natural as the beating of his heart came into play. He wasn’t just running, he was flying, fractions of seconds ticking off in his head with the accuracy of a Swiss timepiece. The world record in the 400 belonged to Michael Johnson at 43.18 seconds. Michael’s best in competition was 43.32. The Kenyan’s was 43.55.

And teach the Kenyan a lesson.

He allowed himself a glance at the Kenyan’s lane to his left. He saw the African was matching him, stride for stride. There was nobody between them. It was down to just them. The damned Kenyan was running the race of his life.

And the spectators knew it. Suddenly, the cheers were no longer for Michael Holt but for the Kenyan.

And then Michael stumbled, not much, just a half-step, nothing anyone but another runner would even notice, but enough to cost him less than a tenth of a second. Less than the blink of an eye.

But enough to lose him the race and cost him the world record.

The stadium went wild. And just before he took his victory lap, the Kenyan turned his head and caught Michael’s glaring eyes, giving him an almost apologetic half-smile and a minute shrug.

Michael Holt went on to win the remaining five events the following day, giving him nine out of the ten and setting a still-unbroken Olympic record for the decathlon. Nine out of ten. The Olympic gold. But what he remembered most about his victory was that .05 of a second loss, all because he got cocky and allowed himself to be distracted by something else, taking his eye off the prize, off the finish line where it belonged.

Losing your focus. That’ll kill you every time.
Posted by Paul Kupperberg at 6:35 AM

nice! i always thought mr. terrific--either one--had a cool back story and motivation, this only adds to that.

and a perfect time to post it, of course.

Wow. That is some good stuff right there!