On August 16, I decided to return to The Same Old Story, a novel I had started a while ago on which I had written about 21,000 words. The book is a mystery, set in the early 1950s and features a pulp and comic book writer who is the son of a late and legendary N.Y.P.D. homicide cop who solves crimes on the side. The plan is to continue working on The Same Old Story simultaneously with my paying assignments, shooting for a manageable 500 words a day on the novel in addition to whatever else I happen to be working on for a check. In the seven days since I started this program, I've written a 12-page comic book script for The Simpsons comics, researched and plotted a 4,400 word Phantom story, wrote two-thirds of another project (this one's also on spec but it's a specialty book that I think has legs), and pitched ideas for my second Superman young reader chapter book to the publisher...all while adding 6,125 words to The Same Old Story, averaging 875 words a day.

At this rate, I'll have a finished novel no later than Thanksgiving.

There's something to be said for this slow-and-steady thing. Here's some of what I've written in the last couple of days: 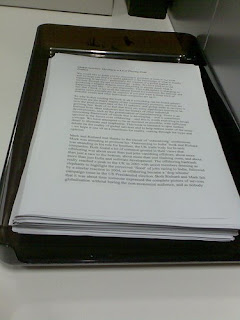 “Besides, why hurt Moe?” she asked. She looked away, staring at some memory I couldn’t see. “He was harmless.”

“How well did you know him?”

“Well enough, I suppose,” she said and smiled fondly. “We worked in that same damned little cubbyhole of an office together for six years. It’s hard to have secrets under those circumstances.”

Shelly blinked at me over the rim of her cup. “Do I think Moe did what?”

“Oh, good lord, no,” she laughed. “Morris Schindler was as easy to read as an open book and twice as pale as its pages.”

“So no secret gambling?”

“No. Moe, blanched at the thought of flipping a dime to see which one of us paid for coffee.”

“Straight as an arrow.”

Shelly blinked at my sudden change in direction. “Konigsberg?”

I nodded and gave her time to answer while I sipped the bitter little cup of espresso.

“Bob was a lot of things, but he didn’t drink. Not even socially. He couldn’t tolerate alcohol, for medical reasons.”

“And yet he had a small amount of it in his system when he died.”

Shelly Davis shook her head` and said, “That’s not possible. He was on medication. He never touched the stuff. Besides, I was with him, at some chop suey joint, about an hour before he,” and she paused, swallowing hard and revealing the briefest moment of sorrow, “about an hour before he died. I’ll confess to having had a few shots myself.” She laughed self-consciously and hid her face in her cappuccino until she could regain her composure. “It was very stressful, Max. Bob couldn’t accept that I had ended it and he kept looking for ways for me to forgive him and get back together.”

“That wasn’t an option?”

“No, not at all. I don’t know what ever possessed me to take up with him in the first place.” She lighted a new cigarette and blew the smoke at the ceiling. “I guess it was because he was witty.”

“Hmm, yes,” she said around her cigarette. “Debonair. Worldly. He said things I didn’t understand. Deep.”

She held up her hand like a traffic cop. “Please, I know. It hit me after a while, once the intoxicating effects of the Bay Rum aftershave and aged Scotch wore off. He wasn’t deep. He was just sad.”

“Because he was so sad. He couldn’t always live with his own thoughts. And me,” she said, drawing on her smoke and watching the tip burn red. “I couldn’t live with him.”

“Any chance he took a drink later, after you last saw him?”

“It’s possible, I just don’t think it’s likely. He’s not a drinker. He’s never liked alcohol or been able to drink, so he didn’t immediately think to reach for the bottle when he was unhappy or scared. It wasn’t how he was conditioned, you know?”

“How was he conditioned?”

“To go off on rants. Sometimes funny, sometimes crazy. To find fault with everyone else and set them straight on their shortcomings. To find a conspiracy everywhere he looked, including an international anti-Semitic organization’s connection to a busy restaurant that was unable to seat us for half an hour.”

“Sometimes. Mostly, though, he was fine. Just full of himself and his superiority, which would have driven me off eventually, anyway.” She looked me in the eyes. “I can tolerate assaults to my self-esteem for a while. Bob used up his allotment of abuse faster than most, that’s all.”

Shelly flicked some ash into the ashtray and leaned back, half closing her eyes and looked, all of a sudden, soft and vulnerable, like a dream. “I’m so tired,” she said. “I haven’t been sleeping very well, I guess. I know it’s ridiculous, but I almost feel like a target, pinned to a fence. There are a bunch of us, lined up in neat little rows, right alongside each other, and bang, the target to my left gets hit, and bang, the target right below me takes a bull’s eye, and bang, the one to my right….” Her eyes popped open wide and she sat back up. “Am I crazy to think that I may be next?”

“You’d be crazy not to act as though you might be,” I said.

“What do people think of me, Max?” she asked, out of the blue.

“The…” she said and made a vague, all-encompassing gesture. “You know, people. The gang.”

“I wasn’t aware you had a gang,” I said with a dubious shake of my head.

“I don’t. You do. So? What do they say about me? Older woman who keeps to herself? Office tramp?”

“Probably something in between those two. We don’t spend a lot of time talking about you.”

“But you do spend some time. Everyone at Blue Chip knew I was seeing Bob, didn’t they?”

“Apparently I was the only one who didn’t.”

She favored me with the flash of a smile. “Aren’t you sweet. I’ll bet you dollars to donuts that Bob told everyone about us himself. That bastard liked to brag about his conquests, real and imagined.”

I looked at her with an inquisitor’s raised eyebrow. “That sounds cryptic,” I said.

“His medication,” she said with a shrug. “It often interfered with certain otherwise...normal functions. He wasn’t quite all the man he liked to brag he was. Mostly he was after someone to decorate his arm and listen adoringly to him ramble on.”

I started to signal the waitress for another round but Shelly shook her head. Instead, I stole one of Shelly’s Old Golds. Everything she told me seemed to make sense, but nothing suggested any reason for both these men to be dead. Maybe just having Shelly Davis in common was dangerous, but I’d take that chance.

There was a reason I hadn’t told Uncle Mick I was off to meet one of the principles in his double-murder investigation for coffee, but I’ll be damned if I had it figured out yet. A tiny little voice was shouting somewhere deep in my head not to trust her, that she wasn’t the woman she was making herself out to be. I didn’t want to listen, though. Maybe I’d never pursued Shelly, kept our relationship friendly, but this wasn’t a woman you wanted as a friend, not once you saw past the mask she wore at the office. Of course, I always knew she was beautiful and I understood why she made the men over fifty sigh and the ones under trip all over themselves opening doors for her. I suppose since I’d never given her a signal, she’s never turned on the switch with me.

But now she had. And I still had not given her a signal. I could assume my familiarity with Detective Sergeant Michael O’Connor had been a motivating factor. Or maybe she was just tired of going home with jackasses and jerks like Bob Konigsberg and was looking to take a chance on a nice guy like me for a change. Whatever her reasons, I wanted to believe her and, for tonight, at least, I would.

“I live just a few blocks from here,” she said, starting to gather up her cigarettes and lighter. “If you still want that second cup of coffee, I have an espresso pot.”

“I don’t need any more coffee.”

“I still live just a few blocks away,” she said and looked at me in a way that made the back of my neck feel warm.

Even though she lived close by, we took a taxi anyway. We didn’t talk about murder any more that night.
Posted by Paul Kupperberg at 6:33 AM

paul, did you ever read and/or see Wonder Boys? you could be like the author in that story, continually adding to this book until its like 10,000 pages. :)

When you do, I'll buy it. Has the tone of Spillane and Salinger mixed into a new voice. If I had a page in front of me, I'd be turning it.

That's all I can ask for, Warren. Much appreciated, seeing as how I can't even get my mother to commit to buy one ("I'm the writer's mother! What? No comp copy?")