In March 2008, I submitted this piece to an anthology of flash fiction (stories under 500 words) about zombies. The initial response from the editor was, “Absolutely love it. I am moving the story to the second round of reading,” but it didn’t make the final cut. And yet, it still lives! 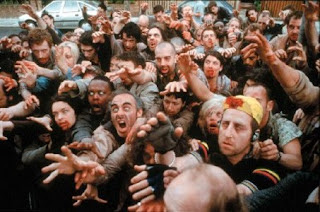 THE ZOMBIE KING
© 2008 Paul Kupperberg
Yeshua was different after his days in the desert. Newly baptized and cleansed of earthly sin, he walked into the desert to fast and pray. Upon his return, forty days hence, he claimed to have fought the undead incarnation of evil and temptation. The wounds suffered in his battle were horrible to behold but he would not let us tend to them.

“I am as I shall ever be, Judah,” he said and went out to minister to the pain and suffering of others while insisting we ignore his own.

His presence in Jerusalem upset the authorities. Those of us who followed him feared for his health as his wounds festered and maggots ate at him. When he ran amuck through the temple, we were fearful. Loukas and I restrained him before the horror of his sickness could manifest to the throng, but no matter the cause of his rampage, while the Romans might ignore much, they would not countenance interference with their commerce.

At the Passover meal, he rose, his skin pale and bloodless as one dead and commanded we eat of his flesh and drink of his blood. We did as he bade, to share in his fate if that was his desire, but it was then I saw what had overwhelmed him and knew what must be done.

As we prayed that night in the garden, I bid him farewell with a kiss and then the temple guards came for him. Shi’mon was the first to fall to the sickness and, in his berserker rage, put his sword to a guard and made to consume his foe before Yeshua bade him cease.

The governor had no choice but to sentence this once-mortal abomination to the cross like a common criminal. He was left to die at Calvaria and when that was done, Marcus and Loukas removed his body, moldered as one dead for many days, to a cave and sealed that cave with a great boulder.

On the third day, his mother Mariam came to anoint his body and found Yeshua waiting for her, dead yet behaving as one alive. The stench about him caused her to reel and he made to conceal the hideousness of his form beneath the shroud in which we had laid him to rest.

“Forgive me,” he said as he hobbled away to feed elsewhere the hunger that would become familiar to all of us who had eaten of his flesh.

And so we would follow, for he was Yeshua, our king who had risen again.

the end
Posted by Paul Kupperberg at 8:26 AM