An Artist and a Gentleman 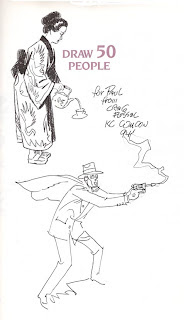 I just read that Golden Age comic book artist Creig Flessel has died at the age of 96. I had the privilege of meeting and spending some time with Creig in 1994 when we were both guests at a comic book convention in Kansas City. My buddy/brother Rick Stasi, one of the convention organizers, asked me to present Creig with a Lifetime Achievement Award at that show, one of those things that conventions hand out to guests of honor on a fairly regular basis. In Creig's case, however, it was well-deserved and entirely heartfelt, as was the short speech I gave along with the award.

The following day, Creig came over and handed me a copy of one of the numerous how-to-draw books he had done with Lee Ames, DRAW 50 PEOPLE (Doubleday, 1993). The Sandman sketch and inscription pictured above were on the title page. I treasure it more now than ever.

For instance, back when I first started reading comics, I would go to this used book and comic shop in Brooklyn to feed my habit on pretty much a weekly basis. This place carried used comics by the ton, comics that could be had for 10¢ and up. But the real treasures, the Golden Age and ECs... the expensive stuff, was kept in a glass showcase at the front of the store. I couldn’t afford these treasures, of course... even though the comics that go for tens of thousands today were available for mere tens of dollars in those days, but to a 12 or 13 year old on a fixed income of allowance and after school jobs, 20 or 30 bucks then might as well have been ten thousand.

But even if I couldn’t afford to own them, I was allowed to look at those treasures, and one of the things I remember are the covers. Especially the good ones... obviously. One of the artists behind a lot of those covers was a man named Creig Flessel.

The Golden Age was the formative years of the comics industry, and like the developemental stages of any person or art form, there were, obviously, growing pains. A lot of this art forms early stuff was pretty crude, often written and drawn by creators with more heart than ability, so even the good ones managed to stand out... and the great ones were like shining beacons, thrilling their readers and alerting the coming generation of creators to the potential of this new medium.

Creig Flessel was one of those beacons. He began his professional career in the mid-30s as an illustrator for the Street and Smith pulp magazines before moving to DC Comics in 1936. His amazing covers graced many early DCs, such as ADVENTURE COMICS, MORE FUN COMICS, and DETECTIVE COMICS, including the very first issue of that historic title. Flessel’s work was alive, his characters warm and breathing on those glossy four color covers... if you don’t believe me, see if you can locate a copy of ADVENTURE COMICS #44, wherein a very surprised Sandman is caught in the act before an open safe when the lights come on. Or ADVENTURE #46, with Sandman leaping over a fence to blast a different thug with his “gas gun.” Or, one of my all time favorites, the cover of DETECTIVE COMICS #15, featuring a top hatted jewel thief, the mirror behind his head showing the reflection of the two cops entering the room with guns drawn.

Creig ‘s work also appeared on the inside of comics, writing, drawing, and/or coloring such features as SPEED SAUNDERS, THE BRADLEY BOYS, PEP MORGAN, SHINING KNIGHT, and, of course, the original SANDMAN. He went on to assist on the syndicated strips as DIXIE DUGAN and L’IL ABNER, worked in advertising for clients like Ralston, Royal Crown, Campbell’s, General Foods, and Bulova, and was a regular contributor of both covers and comic strips for BOYS’ LIFE.

Creig Flessel is an illustrator, a first-rate artist with an eye for detail and a delicate, masterly ability with brush and pen.

Creig Flessel was one of those bright lights of the Golden Age and now, almost 60 years since he first put that brush and pen to paper to create some of the most memorable images of his time, we’re here to honor him, to let him know that we remember him and his contributions to comics.

As I said, some things are just plain obvious. And it’s obvious that there are fewer people more deserving of receiving the Kansas City Comic Convention’s Lifetime Achievement Award than this year’s recipient, Creig Flessel.
Posted by Paul Kupperberg at 10:04 AM