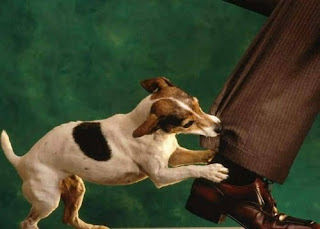 GOP UNVEILS LIBERAL-SNIFFING DOGS
© AMI
Silver Springs, MD–The Republican Party is going to the dogs. And they’re proud of it! The GOP announced last week that scientists at the Newt Gingrich Institute, a conservative scientific think tank in suburban Maryland, has successfully trained dogs to sniff out liberals wherever they might hide.

“After years of research we discovered that liberals have a scent unique to their political persuasion,” said Conservative Psychologist Dr. Silo Barksley, D.V.M. “It's the most important political breakthrough since the wiretap.”

Republican political operative Roseanne ‘Ro’ Virginia Waid was one of the first conservatives to applaud the Gingrich Institute’s achievement.

“We’ve been needing something like 'The Checkers Project' for the longest time,” Waid said. “Ever since 2000, when we started staging Republican campaign events that were closed to anyone who didn’t agree with us, liberals have had this annoying habit of sneaking into our rallies and town meetings and asking questions our candidates either couldn’t or didn’t want to answer. Frankly, such unscripted spontaneity was making our guys look incompetent.”

“There's a problem with liberals that goes beyond their political ignorance,” said Republican National Committee spokesman Whit Bread, “Dress them up in nice clothes and cut their hair and you can’t tell what they believe just from their appearance.”

According to Dr. Barksley, however, liberals will no longer be able to fool conservative door-watchers with a simple disguise. “We conducted a detailed analysis of the problem starting with a simple premise: if you can’t see a difference, can you smell one? After all, you used to be able to smell Hippies. Assuming the answer was 'yes' we wondered, ‘What would a lefty smell like to a dog?’ Since canines have a sense of smell many thousand times more sensitive than humans we searched for, and found, a scent that set liberals apart.”

Dr. Barksley’s research assistant, Selma Alabama, was in charge of analyzing the liberal smell. “Many ingredients go into the smell of liberalism. Some of it is easy to document, such as bargain-brand herbal shampoos, baby powder, compost, and Snapple tea. Others, however, were tougher to recreate, especially the odor of recycling centers.”

Major Danny “Bulldog” Domo, a retired U.S. military canine handler runs the Republican dog training program. “For some reason, those little prissy dogs like Shitsus, Pomeranians, and Lhasa Apsos are best for this work,” said Major Domo. “Guess it takes a yippy dog to know a yippy-liberal, you know what I mean? Anyway, trainers are sprayed with ‘the odor of sanctity,’ as I like to call it, and the dogs are taught to sniff them out.”

So far, ‘Ro’ V. Waid is wildly enthusiastic with the results of the program. “We held a town meeting in Boston last month. You know, Massachusetts is just crawling with liberals. Thanks to our liberal-sniffing dogs we were able to weed out dozens of lefties who tried sneaking in right at the door.”

Whit Bread agrees, saying, “That was probably the first totally liberal-free town meeting we ever held. In fact, we even managed to cull several left-leaning Republicans from the herd before they could make trouble. I’d venture to say there wasn’t a single dissenting voice or original thought in the whole place. It made me proud to be a Republican.” The Republican leadership is considering expanding the program. A spokesperson for Repesentative Tom DeLay (R-Texas), the party's main attack dog, said, “Considering the partisan battles we expect to wage in the coming months over such issues as Social Security and Medicaid reform, imagine how helpful it would be to nip Democratic opposition in the butt–if you’ll forgive my bon mot.”

“My only concern is that the dogs will go for Ted Kennedy first,” Bread adds. “Chomping on him will keep our entire canine corps busy for days.” He paused. “Maybe even weeks.”
Posted by Paul Kupperberg at 9:05 PM

As opposed to Newt Gingrich IN an institution.

young republican 1: "what did you major in while at NGI?"

young republican 2: "oh, i majored in Ditching Your Cancer-Ridden Wife While She Was Still in the Hospital, while minoring in "Demonizing Democrats for Fun and Profit."

i can only imagine how many people took this one as true. lol.