A Portrait Of The Artist As A Young Jewish Writer 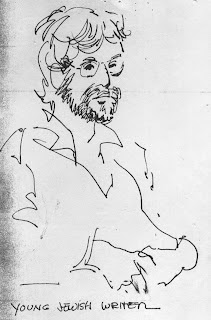 By the way, I've been meaning to mention this since I started And Then I Wrote...:

The illustration I use in my profile is by Joe Orlando (1927-1998), one of comics greatest artists and editors. I was lucky enough to know Joe during our shared time at DC Comics and considered him a friend. He was also my editor on several projects and even drew one or two stories I wrote. (It's difficult to explain exactly what that means to someone if they've never written comic books OR have written them but never had the privilege of having a legend--and I mean a real legend; not some recent marketing or self-labeled wannabes--draw what they've written. I got into comics in 1975, just as my generation of young punks was replacing the legends, so I was fortunate enough to see my words translated into finished stories by some of the truly greats on several occasions, not only Joe but Jack Kirby, Steve Ditko, Curt Swan, Carmine Infantino, George Evans, Gil Kane, and others.)

Anyway...Joe would often noodle in a sketchbook while he talked with writers and artists, and this portrait was one such noodle, produced some time around 1983-1985, when I actually was a young Jewish writer, likely during a plotting session for either a Super Powers minsieries (comics based on the DC superhero action figures by Kenner) or a continuity arc for The World's Greatest Super-Hero: Superman syndicated newspaper strip. I photocopied the page from his sketchbook, the use of an overworked early-80s Xerox explaining the crappy reproduction of the piece.

Posted by Paul Kupperberg at 10:09 AM