Jew-Jitsu: The Hebrew Hands of Fury

A little something from JEW-JITSU: THE HEBREW HANDS OF FURY by Rabbi Daniel Eliezer and Paul Kupperberg, photographs by Robert Simses. 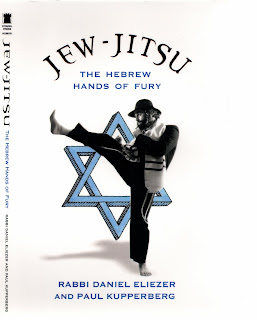 JEW-JITSU: THE HEBREW HANDS OF FURY
Introduction
Du oifn fun der mensch
© 2008 Paul Kupperberg
Rabbi Sausalito Ben Venuto of Sicily was once asked by a student, “Rabbi, why is it that the wisest of men, when asked a question of Torah, always pauses before he speaks?”

The Rabbi paused, narrowing his eyes and studied the inquisitive young scholar. He began to stroke his long, gray beard, nodding slowly in deep thought.

“As it is written,” said the Rabbi at long last, “the Talmud is so vast, so complex, even the wisest of the wise must naturally reflect before divining the single right answer he seeks from its multitude of layers and infinity of complexities.”

“Ah, and where exactly is this written?” replied the excited student, his quill poised at the ready to make note of the source of this rabbinical wisdom.

Rabbi Ben Venuto paused once again, then at last replied, “Let me get back to you on that.”

What does this have to do with the practice of Jew-jitsu, du oifn fun der mensch, or the “way of the righteous man,” the sacred Jewish art of self defense? Absolutely nothing, but since when is it such a bad thing to discuss a little Torah?

And, come to think of it, danger can be like the story of Rabbi Venuto. Often, it has nothing to do with anything else, coming upon us as a sudden and unwanted digression in the unfolding saga of our lives. One moment, we are discussing Torah, the next, we are engaged in mortal combat with some bulvan.

Thus, like the Talmudic scholar in whose mind rests the answers to almost six thousand years of accumulated Jewish learning, the student of Jew-jitsu must always be at the ready to answer danger with swift and decisive action. A klapn to the kop, a zetz to the kiskas, listen, a person shouldn’t be allowed to defend himself?

I’ll tell you what it’s not about! Yes, there is a lot of hitting and kicking and geschreing, but that is only a byproduct of the discipline, the training of the mind and the body to become as one, to be as aware of your immediate environment as David was with Bathsheba.

It’s also not about a nice white set of rabbinical Jew-jitsu robes, or the color of your tzitzis as you progress through the ranks, or the bowing and the formality, ‘Oh, rabbi, thank you for your wisdom,’ ‘Oh, rabbi, thank you, rabbi, I shall treasure that forward hip throw for all the days of my life, rabbi,’ or any of that meshagass. No!

Jew-jitsu is about the chai (no, not like the tea, this one’s pronounced k’hí ... no, deeper, back in your throat, with that Khhuhk, Khhuhk sound. No? Okay, listen, you’ll practice later on your own, bubbee.)

Chai, in Hebrew, is spelled with the letters het and yod and means “living.” It’s part of the same word family as l’chaim, the Yiddish toast meaning “to life.” And because het and yod add up to the number eighteen in Kabbalistic interpretations of Hebrew, eighteen is a lucky number to Jews.

And that is why we follow the Eighteen Forms. Because eighteen means life and life means luck and luck, as it has been said by Rabbi Tony Faro of Las Vegas, favors the prepared son of Yisroel. Thus are those who accept the way of chai and follow the path of the Jew-jitsu macher walking the walk of life, of health, of happiness, and, go figure, maybe even a bissel knowledge.

Yes! It’s all about you! What more could you ask from a faith-based martial art?

But it’s also about the guy next to you, and your wife, and his wife, and your cousins, even that shnorrer brother-in-law of yours, and everyone else. Once you step into a chaider to study Jew-jitsu, you want to think about yourself, who’s going to stop you? Who else are you to think about? You’re in training! Of course you’re going to focus on yourself, so stop being so neurotic already.

People often ask me, “Rabbi Eliezer, do you have to be Jewish to practice Jew-jitsu?”

I tell them not to be such goyishe kops! Of course not! You don’t even need to belong to a Reformed temple. Jew-jitsu is for any righteous individual who seeks to right a wrong or prevent harm coming to himself or another human being. Or his property. And the property of the immediate family, some mamza comes along wants to start a ruckus, you’ll give him what for.

Jew or gentile, this book will start you on the road to enlightenment. But before you turn the page and embark on that long and arduous journey, please take a moment to pause and remember that which was written by Rabbi Zalman Lipton of London, “Sit, sit, have a nice glass tea, relax first, tell me how’s by the family, then we’ll get down to cases.”
Rabbi Daniel Eliezer
Jew-jitsu macher, 10th degree tallis with black tzitzis
Crown Heights, Brooklyn, N.Y.
3 Cheshvan 5768 (October 15, 2007)

Posted by Paul Kupperberg at 10:35 AM