Jew-Jitsu is in the News!

Well, actually it's in the Stamford, Connecticut Times (and its local sister/associate papers here in Lower Fairfield County, such as the Wilton Villager) in a nice feature article, "The Art of Jew-Jitsu". Yes, it's a local giveaway paper, but they gave me great play: a promo blurb & picture over the logo on the front page, and almost the entire top half of the first page of the Arts & Life section and a picture: 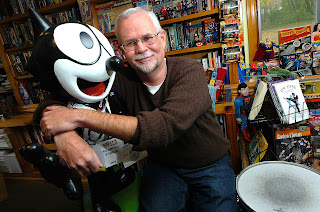 Photo/Alex von Kleydorff. Paul Kupperberg with Felix the Cat,
a gift from a friend, in his Stamford studio.
THE ART OF 'JEW-JITSU'
By Chase Wright
© 2008 The Hour Publishing Co.
STAMFORD -- Paul Kupperberg has an obsession with absurd humor.

As a child, he read nearly every edition of Mad Magazine, collected Jerry Lewis memorabilia (he has a scotch tape dispenser with Lewis' smiling face on it) and still points to the best-selling humor book by Jack Douglas, "My Brother was an Only Child," as the source of his inspiration.

Now, the former satirical writer of such defunct prints as Weekly World News and Marvel Comics' Crazy Magazine has taken his obsession with absurdity to a new, more controversial level.

Kupperberg's new book "Jew-Jitsu: The Hebrew Hands of Fury" pokes fun at a people persecuted for over 2,000 years.

"Nothing is sacred," said the Stamford resident, who is Jewish.

The fictional humor book, co-authored by the fictitious Rabbi Daniel Eliezer, disguises itself as an illustrated instruction manual designed to help anyone, Jew or gentile, master an arsenal of both deadly and friendly self-defense techniques.

This step-by-step guide takes readers first through the "Eighteen Forms" of meditation (18 being a lucky number in Judaism) to mastering complex martial arts moves such as "Receiving the Torah," "Throwing of the Star of David" and "The Deadly Punch in the Kishkes."

Bet you didn't know that the same motion you use to break a loaf of challah could knock a man unconscious, did you?

For those who would rather work out their differences than stab an opponent with the three prongs of the menorah, there's a guide to non-violent fighting techniques as well.

Confuse your opponent by continually muttering such phrases as Oy gevalt! or Och un vai!, the book recommends. Or settle the dispute over a nice hot meal using the technique "Sit, Sit, Eat, Eat!" This move is particularly effective, says Eliezer, because, as it is said, "Brisket hath charms to soothe the savage beast."

Jew-Jitsu, developed by Rabbi Chiam Mangawicz, has its origins in mid-19th century Japan, according to the fictional book. In exchange for circumcisions and Judaism, the Japanese introduced Mangawicz to their language and the ancient and venerable art of Jujitsu.

With the addition of the Torah, Mangawicz created Jew-Jitsu, a combination of the Jewish faith and Jujitsu that come together as one.

"As the mama will gently sidestep objection with the gentle application of guilt, so does the student of Jew-Jitsu move his opponent with subtle leverage," wrote Mangawicz.

The book itself has no direct references to the sworn enemy of the Jewish faith, the Nazi, but Kupperberg says the obvious is implied.

"When you do Jews being picked on, you have to include Nazis," he said.

But don't go planning your revenge on the Egyptians, the Cossacks or the Bolsheviks just yet, Kupperberg warns.

"The book is merely for entertainment purposes," he says. "It's total farce. The only thing these moves will do is get you killed."

The Springdale resident is a comedic expert, but he doesn't expect everyone to understand his sense of humor.

"It wasn't my intention to insult anyone," said Kupperberg. "There's no hidden message. All I want from the reader is for them to sit back and laugh like an idiot."

Sitting in the basement of his Tree Lane home, surrounded by thousands of DC Comics, many of which he's had a hand in writing, Kupperberg reveals the secret to comedy.

"The secret to humor," he says, leaning back. "Is introducing an element of reality that people can relate to, and from there you branch off into crazy."

It's precisely what he's done with his latest book. He introduces stereotypes and symbols both Jews and non-Jews are well aware of and takes them to a ridiculous extreme.

"It's all in good fun," says Kupperberg. Plus, with a full Yiddish glossary included, you might actually learn something.

Published by Citadel Press, a notorious publisher of Jewish humor books, "Jew-Jitsu: The Hebrew Hands of Fury" is on sale in bookstores now for a price of $12.95.

L'chaim.
Posted by Paul Kupperberg at 7:03 AM

Thanks. I feel so special...especially after the (Orthodox) Rabbi's wife said to my wife the other day, "We saw that lovely article about Paul in the newspaper. Mazel tov."