This is a short story I wrote about five years ago; the idea was sparked by a small footstone for Sidney Aronson in the graveyard near where my mother-in-law lies. My father's name was Sidney, so whenever we visit the cemetery, I always put a stone on Mr. Aronson's grave as well (it's a Jewish custom; you put a stone on the grave as either a sign that someone has been there to visit, or as a reminder of the fall of the Biblical Temple, I've heard both cited as the reason). The story's got a decent enough set-up, a good middle, but no finish. Everything I've come up with so far is flat and predictable, but I take a look at it every now and then and see if anything new or fresh jumps out at me. So far,nothing, but here's the first quarter of it: 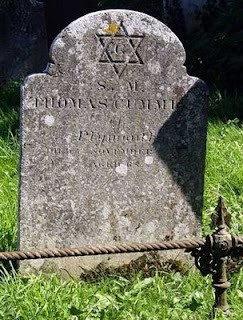 A STONE FOR THE GRAVE OF MR. ARONSON
© Paul Kupperberg
Silent as a tomb. In the dead of night.

He never really thought about what that meant until now. Walking through a cemetery in the hour just after dusk on a bone chilling autumn evening, colder than the time of year warranted, cold, he thought, as the grave. There wasn’t a sound, not the buzz of insects, not the chatter of birds or the whisper and rustle of wind through the drooping branches of trees, heavy with the dry weight of dying foliage. Quiet. No life except for the one he brought through the graveyard gate and that wasn’t much of a life at all. Too quiet for his tattered nerves. Too quiet for a guy with a kilo of stolen cocaine jammed into the pocket of a lightweight overcoat as tattered as those nerves.

Row after row of cold, hard headstones growing out of withered, brown grass. Otherwise forgotten names long ago chiseled in loving memory, untended tributes to mother, father, grandparent, child. He read off the roster of the dead to himself as he trudged through fallen leaves carpeting the paths between graves. Steinberg, Abramowitz, Levine, Weinstock, Bromstein, Sherman, Tockman. The dates, parenthesis enclosing lives barely lived, lives lived long: 1911 - 1919. 1904 - 1979. 1924 - 1944. Do the math, compute the life-spans, no matter the longevity, never time enough.

Anything to keep his mind off the truth, that he had come here to join the dead. Except there would be no carved granite monument bearing his name, no reason to memorialize what he would be leaving behind. He’d seen to that by living as he had.

Get used to it, he thought. This was going to be home for what was left of eternity.

They couldn’t have picked a better place for the meet. The Jewish section of the old cemetery outside of town, its last occupant lowered into the ground more than a dozen years ago, filling the final six foot by three foot by six foot deep piece of real estate. Who came out to an inactive graveyard at this hour, on a miserable night like this? One stop shopping for them: they got back their property and had a place to leave his lifeless sack of flesh when they were through. They told him all they wanted was the merchandise, that he could just hand it over, say he was sorry, and walk away.

But he knew what was going to happen, what had to happen. You didn’t mess with these guys, take what was theirs and not pay for it. Letting themselves get ripped off and doing nothing about it would be bad for business. Examples had to be made, messages had to be sent to the next guy who even thought about taking them off. He would be their billboard warning the whole world to keep hands off. He had hoped that throwing them Rickie, his partner in that sorry town and this even sorrier attempt at instant wealth, would satisfy them, but Rickie had wound up with half his head gone, shoved into the trunk of a wrecked Buick waiting to go through the metal crusher in the salvage yard on the other side of town. Now it was his turn.

The old man was there, standing with bowed head before a weathered headstone. He wouldn’t have seen him in the gloomy silence, would have walked right on by, mistaking him for just another graveyard shadow, if the old man hadn’t spoken, calling out to him, “Hello?”

He stopped, fear squeezing his heart. Were they here already? He had arrived early, why not? There wasn’t anywhere else he could be, no way in hell he could run from them. Besides, a man doesn’t want to be late for his own funeral.

Then he saw the old man, a shrunken figure in black topcoat with sparse white hair framing a withered face with wrinkles that were a roadmap of a long life lived hard. Rheumy eyes glittered at him in the half light. No, this was no harbinger of his own death, merely a mourner of an earlier victim of the reaper. So he forced himself to breath again and resumed walking, head down, back on track to his meeting with the inevitable.

Keep walking, get there and get it over with. He’d been living with the numbing fear of his own coming mortality for more than two days now. Forty-nine hours to be precise, at 4:37 in the afternoon the day before yesterday when he realized there was nowhere to run and Junkyard hissed in his ear that they knew who he was and were looking for him.

“I’d help you, man,” Junkyard simpered, compulsively running his hands up and down the thighs of his greasy coveralls. “You’re my bud, I wanna help, but you gotta understand I can’t, don’t you? They know I did for you, they’ll kill both of us.”

Ray had just stared, a pulse beginning to pound in his forehead. He looked at the neon dial clock over the door of the small service station office. 4:37. The moment his death warrant had been signed.

“And they’ll know. Word’s out, dig? Hands off’a you and don’t no one cross these guys. You see my hands’re tied, don’t you, Ray?”

How had it come to this? How did a life suddenly go from hope to hopeless in the blink of an eye, the tick of a clock on a rainy autumn afternoon at 4:37 P.M.? The scheme couldn’t have been simpler: walk in a door with three bucks to his name, pick up a package, and walk out a minute later richer than he’d ever been, ever hoped to be. It should have been a walk in the park.

So how did that turn into his last mile through a graveyard?

The answer was simple, as obvious as every other piece of ill fortune and bad timing that was the story of his miserable life. Born to the wrong parents, friends with the wrong people, consistently being in the wrong place at the wrong time with the wrong idea. He gave nothing, took whatever he could get his hands on and to hell with who it hurt. Like Rickie, the poor bastard. And for all that, what was he left with? What had he ever done that wasn’t selfish and wrong? Whose life had he ever touched who would give a second thought to him when they heard he was dead? Except they never would hear the news. He’d just disappear, and the few who might, for God knows what reason, have cause to remember him, would just assume that he’d moved on to another place, where he could start stealing and swindling and creating misery among people who didn’t yet know, but would find out soon enough.

Forty-nine hours gone. About twenty minutes left to live. Did he want to spend it talking to some old fart in the cemetery? Would be like getting stuck with his senile old grandpa again. Old man had gone seriously nuts when Ray was in high school and had come to live with him and his mom. That was a trip, his boozer old lady and her old man, him shrinking daily under the weight of Alzheimer, her under the bottle, making each other crazy, spending all day screaming drunken, senile gibberish at each other. Good enough reason for Ray to have quit school in his junior year and get the hell out of there.
Posted by Paul Kupperberg at 11:29 AM

Email ThisBlogThis!Share to TwitterShare to FacebookShare to Pinterest
Labels: excerpt, short story, Stone For The Grave of Mr. Aronson, unpublished