Whatever your politics, yesterday was an amazing day in America. I heard one TV talking head refer to Obama's election as the political equivalent of man landing on the moon and I can't say I disagree. I never thought an African-American would be--could be--elected president in my lifetime. I remember very different days, even here in the northeast, when such a thing was unthinkable except in science fiction.

And speaking of American presidents from Illinois (didja catch that smooth seque?), here's a story I wrote for Weekly World News in May 2005: 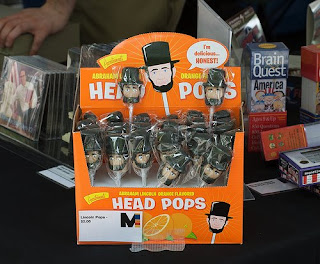 SHOCKING DOCUMENT REVEALS THAT LINCOLN WAS INSANE! HIS OWN CABINET SECRETARY PLANNED HIS DEATH
© Weekly World News
"The truth can no longer be denied: Mr. Lincoln is nuttier than a Georgia pecan plantation. Though this be treason, the United States shall cease to exist if steps are not taken to remove him from office."

Thus wrote Edwin Stanton, President Abraham Lincoln’s Secretary of War, in his personal diary on March 20, 1864, The journal with its explosive revelations was discovered last week in a dusty old riding boot in the attic of the Georgetown, Washington home where Stanton lived.

Stanton first encountered ‘Honest Abe’ in 1850 when they were on opposite sides of a legal dispute. The future secretary knew 'crazy' when he saw it; he was the first lawyer in America to mount a defense of temporary insanity in a murder case, which he won.

"Mr. Lincoln is a nail biter with more tics than a dog," Stanton wrote at the time. "He weeps suddenly and uncontrollably and wins cases because juries feel sorry for him."

Though he was a wealthy and successful lawyer in 1860, Stanton actively sought the position of Secretary of War.

"Though my personal fortunes suffer from government service, I must stay close and try to moderate this man's mad schemes," he wrote. "A rational man would let the southern states go. Without the North’s industrial might the Confederacy will quickly wither. They will petition to rejoin the United States in a year or two. Yet I fear that this gangly fool will settle for nothing less than war. He will throw away millions of innocent lives just to be seen as a strong leader -- and give the South the kind of switch-beating his own mama gave him."

"It is a daily struggle against lunacy," a weary Stanton recorded on February 9, 1865. "He screams at his wife Mary, yelling that she's a spy for the South and ordering her to sleep with the servants. He asks his son Robert to go kite flying -- at night."

Those actions troubled the secretary less than Lincoln's attitude toward the South.

"The rebels soon will be defeated and Lincoln is fixated on putting President Jefferson Davis and General Robert E. Lee on trial," Stanton noted. "'They are traitors!’ he mutters as he walks the corridors of the Executive Mansion, shaking his bony fist. ‘They must hang!’ I fear that if we kill their proudest sons, the South will never reunite with the North. They will burn their crops and slaughter their farm animals and the southern states will starve. Disease and poverty will embrace the reunited nation. The suffering will go on for years.

"Our only option is a terrible one: Abraham Lincoln must die!"

Stanton conceived how to do it. John Wilkes Booth was one of the most famous faces of his day. He sympathized with the south and his fame allowed him freedom of movement throughout Washington. He was the perfect man to execute Stanton’s plan - and the president.

"Though it will cost him his reputation and no doubt his life, Booth has agreed to be the instrument of America’s salvation," Stanton wrote.

On April 14, five days after the South surrendered, Stanton got word to Booth that Lincoln was to attend a play at Washington’s Ford’s Theater. That night, the actor slipped into Lincoln’s box and shot the president dead.

"We shall carry the burden of this terrible secret to our graves," Stanton wrote of the assassination. "But with poor Mr. Lincoln gone, the South will spare itself from suicide and reconcile with the North. The Union has been saved."
Posted by Paul Kupperberg at 6:30 AM

why do i think stuff like this actually happened under Bush/Cheney?

Don't think that wasn't on my mind when I wrote this piece...