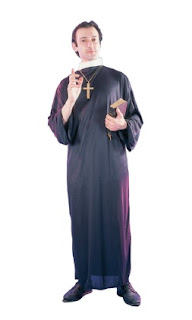 PRAISE THE LORD, GET VALUABLE POINTS!
© Weekly World News
VATICAN CITY – What do the Catholic Church and your local supermarket have in common?

To combat falling church attendance, the new papacy has taken a cue from American supermarkets and drug stores by issuing the new Indulgence-Points Card to all church-goers.

“The concept is very simple,” Cardinal John Joseph “Dwayne” Reed told the Weekly World News. “Every time one of the flock attends a church service, they swipe their Indulgence-Points card through the card readers on the collection plate and receive valuable points good towards getting into heaven.”

The idea was first put forth during a special conclave with the newly elected Pope to discuss falling church attendance around the world.

“The numbers were starting to get embarrassing,” a monsignor who wished to remain anonymous told us. “Attendance has been falling by double digits every year. The faithful were draining away from services faster than altar wine at a Dublin parish house. We were desperate to staunch the flow.”

“The pontiff was behind the idea right from the start,” said Bishop Doyle Dane, the man of the clothe in charge of the Indulgence-Points program. “He just that day had gotten $5 back on his purchases at the drugstore, so he knew the value of a good idea.”

“It’s shaping up to be a boffo promotion,” Bishop Dane continued. “With over one billion churchgoers in the world, we’ve so far distributed almost 220 million cards that have racked up over 82 trillion indulgence-points in the first two months alone.”

“Heaven will be filled with a host of value conscious believers,” said Father Joseph Mario Spumdilini, pastor of Our Lady of Perpetual Rationality, one of the churches used to test market the Indulgence-Points Card. He was surprised at how effective the program was. “We issued them to the congregation and practically everyone has been using them since.”

The Indulgence-Points Card is named for a practice from the Middle Ages whereby the wealthy would pay the Church to do good works in their names rather than actually repent for their sins. “Of course, you don’t have to be wealthy to use the Card,” Cardinal Reed is quick to point out. “All you have to do is show up and swipe your card. Anyone, rich or poor can do it.”

“We expect to add special features as we go along,” said Bishop Dane. “Like extra points for attending special masses, confirmations and baptisms. And for every Christmas mass a cardholder attends, we’ll be giving out a $5 gift certificate to Toys ‘R’ Fun.” The bishop winked and smiled. “Cross-promotion, my friend. Gotta give the public value for their efforts, y’know.”
Posted by Paul Kupperberg at 3:36 PM