About a month ago, I ran an excerpt from Hey, Sophie!, a young adult novel I wrote for a client that will likely never see publication. Here's a bit more, taking place later in the story, with Sophie heading out into the bayou by herself to investigate the mysterious stranger who lives there: 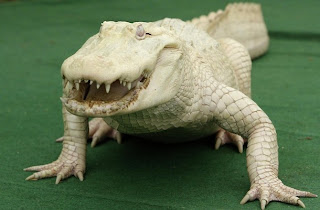 She would have sworn that she had taken the right channel, the one that led straight to the Dog Rock. She had followed the signs Juan had pointed out to her...well, at least she thought she had, but instead of the widening channel, the waterway began narrowing around her. Realizing she must have taken a wrong turn somewhere along the way, Sophie spent several minutes trying to turn the small boat around in the tight waterway before she thought to just turn herself around and start paddling in the opposite direction.

Which brought her right back to where she started before she turned around: Lost!

Everywhere she looked looked exactly like everywhere else. Trees, gobs of hanging, mossy vines, water, rocks...nothing that even remotely resembled anything familiar. The air was hot, heavy and smelled like rotting cabbage. Creatures she couldn’t even imagine, and, frankly, didn’t want to, were shrieking and chattering away in the trees.

She was trying very hard not to panic. She may not know much but she knew panic was bad.

Something wet and heavy fell from an overhead branch and landed on the floor of the boat by her feet. She looked down.

It was a lizard.

So much for not panicking!

It was green and shiny, dotted with small brown spots and about eight inches long. And even though it was just sitting there at her feet looking up at her, its little tail swishing back and forth, its tiny tongue flicking in and out of its mouth, Sophie yanked her feet off the bottom of the boat. She held the paddle in her hands like a club, ready to fend off the little creature if it leapt for her throat.

As if understanding it was upsetting her, the lizard scurried back to the far end of the boat. It perched there, staring at her.

“Oh boy,” Sophie whispered. Now she was lost and under siege by a lizard. How much worse could it get?

Sophie froze. She had heard that sound before, the last time she was out here. And didn’t you think she would have learned her lesson after that?

The sound was far away. Maybe it was something else, a branch falling from a tree into the water. A creature jumping in for a quick dip. A...

...Flat-bottom boat being poled by T-John. Who was, of course, exactly who she came out here to find. But, funny, now that she’d found him, she suddenly wasn’t so anxious to confront him. Sophie looked around, trying to avoid the stare of the little lizard sitting opposite her in the boat. Now, she thought, that she’s in the middle of nowhere and the boogey man was getting closer and closer, this is when she starts believing Juan’s bayou lore. Okay, maybe T-John wasn’t some sort of immortal zombie or whatever, but that didn’t mean he couldn’t be a psycho-swamp-killer with a normal lifespan. Coming out here was dumb. Dumber than dumb. Epically dumb.

No doubt about it. The sound was getting closer, and Sophie could also make out the first bit of toneless whistling drifting across the water.

It was time for a plan and Sophie formulated one in an instant:

She settled for instinct and plain old guesswork, picking a direction and starting to paddle as fast as she could while making the minimum amount of noise. What was she thinking, anyway? How was she supposed to interview someone who couldn’t speak? She didn’t know sign language or even if T-John knew how to write out his answers. Dumb!

She didn’t for a minute believe she’d be able to outrun T-John, but she hoped she could at least find a nice, safe hiding place until he passed by. Just don’t think about anything but paddling, she told herself. Just shut up and move!

Desperation made for a good teacher. Sophie was soon handling the pirogue like a pro, taking turns and investigating side channels for a safe place to duck. For a while, the rhythmic splash-thunk and atonal whistling almost faded from hearing—but either T-John was deliberately tracking her or she just kept blundering into his path. It always seemed to catch up with her again.

Sophie started to swing around into a narrow channel, but a rat-tailed gray opossum surged in ahead of her and began swimming in an endless circle, blocking her way in. Maybe it was protecting its turf or whatever, but Sophie had no desire to pick a fight with something that looked a lot like a house-cat sized rat. She finally had to back up and take another direction. Well, what difference did it make? She didn’t know where she was going anyway.

She raised her paddle from the water and listened. Chirping, screeching birds. Jabbering, screeching animals. Chittering insects. Croaking reptiles and amphibians. Your basic nature. Not a swamp-psycho to be heard.

That was good. Sophie could use a few minutes to rest and gather her wits. Maybe figure something out.

But no such luck. She heard a nearby splash and looked around, the paddle held at the ready to defend herself. A short distance away, something furry and gray, about the size of a large house cat, swam through the water towards the boat. A long pink and white tail trailed behind it. Her first thought was that it was some sort of giant mutant rat, but as soon as it climbed from the water onto the top of an exposed tree stump, she recognized it as an opossum, which, from the looks of it, could have been the same one as before. Could it be following her? For all she knew, opossum was Latin for “giant stalker bayou water rat.” The opossum shook the water from its fur and began a staring contest with her.

Sophie swallowed hard and the heard another sound, a rustling from above.

She glanced up, quickly, in case it was something she didn’t want to see. But this was just a pelican. Another pelican. Was there something about her that attracted these big, white sea birds? It stretched its wings and clicked its big, pointed yellow bill at her.

“You wouldn’t happen to know how I can get home, would you?” she asked it.

The pelican squawked in response.

Sophie sat in the boat and looked from the gecko to the opossum to the pelican. They looked back, nobody moving for several moments, giving Sophie a definite case of the fremeers all her own.

“So,” she said to them, “I suppose you’re wondering why I called you all here today.”

Something else was in the water.

Sophie looked left. All clear. She swiveled her head to the right. Ditto.

She didn’t want to look, but she knew she had to--if only to see what exactly it was that was going to be having her for a mid-day snack.

Slicing through the water like a torpedo about to sink a battleship she’d seen in old movies, Sophie saw the knobby-scaled back of an alligator speeding straight towards her. A white alligator! Juan said albino gators were good luck, but she wasn’t feeling so lucky as it closed on her faster than she could imagine, the massive, oblong head rising from the water, opening its jaws to display row after row of very long and very sharp teeth.

Sophie gasped, clutching the sides of the boat in both hands, hypnotized by the sight of what looked like hundreds of teeth coming to crunch down on the fragile little pirogue. She really, really wanted to scream; but try as she might, Sophie couldn’t make a sound.

She could only stare, frozen in fear.

And those big jaws kept getting closer until they filled her vision, now close enough that Sophie could have reached out and touched its snout.

Which was when the gator stopped and, with a big smile and a wink said in a friendly, deep voice, “Hey, Sophie.”
Posted by Paul Kupperberg at 7:01 AM

this book should be published, if just for:

"The pelican squawked in response."

Alas, it's not mine and, as I said in the first posting of Hey, Sophie!, considering the players and the situation, it's unlikely to ever see print.