More from this unpublished short story. Part 1, Part 2 and Part 3 are here: 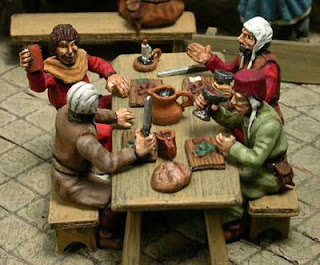 Malasa wasn’t hungry but she knew she needed to eat, so Kahna sought out a fondly remembered inn at the foot of King’s Street. She was surprised and delighted to find the Star and Arrow yet stood, its weathered doors open for business.

She stepped inside, her eyes slowly adjusting to the dim, smoky light. It was as she remembered, a cramped hole in the wall crowded with battered tables and benches at which drank and ate and sang and cursed a throng of the cream of Atlantean scum. Thalis, Kahna remembered with a smile, had a fondness for the commonest of the common and their lowly diversions. He held no love for his fellow aristocrats and found those of noble birth to be royal bores. But give him a workingman’s inn, a flagon of cheap ale and the company of soldiers and laborers and he was content. She suspected he had consorted with the ladies of questionable repute who frequented these places as well. But only before he found Kahna. After that, there were no others in his bed or in his heart.

At least until she had died.

Malasa found a vacant place at a table in the back of the inn. The innkeeper slapped a meal before her of some manner of meat and a slab of black bread on a dented tin plate that Kahna might well had eaten from in centuries past. She called for a draught of whatever had been in the most recently opened cask, and let her shoulders slump back against the wall and closed her eyes.

“Evenin darlin,” a voice croaked near her ear.

Malasa opened her eyes and found herself looking into a scarred and twisted face. She gasped, bolting upright. The face stared at her, unblinking, expectant, then moved closer.

“I’ll be joinin you, then,” he said and squeezed onto the bench beside her. She could smell him, rank and foul like the barnyard in the heat of the sun. He leered at her. “If you’ll not be mindin.”

“I do,” she whispered, afraid. All of a sudden, Malasa did not know what had come over her. What had possessed her to come in a place like this, alone? She was a farmer woman, a mother. She did not belong here.

He reached across her, letting a gnarled hand brush against her breast, for the bread on her plate. “Ahh, be nice to old Wylk,” he said. He brought the hard crust to his mouth. “By Crghas, I swear old Wylk’ll be nice to you.” He laughed, a wet, raspy and horrible sound that made Malasa shudder and Kahna angry.

Wylk cupped her face in his coarse hand. “What say ye, woman?”

“What do I say?” Malasa’s face twisted into a snarl as her hand closed around the handle of the knife on the table before her. Before she knew what she was doing, Kahna had brought it up and pressed the dull but still effective blade against his throat.

“I say,” she hissed, “I know many ways to kill and I’ve never minded employing any of them.”

Wylk screamed, throwing himself back off the bench. He landed, sprawled on his ass and reaching for the spot of blood on his that marked where she had nicked him. She stood and held the knife for all to see. “Anything else, little man?”

Wylk scrambled to his feet, his eyes never leaving the blade, and scurried away from her.

No one else bothered her for the rest of her meal.

* * *
Malasa stopped at a stall lighted by torches and displaying bricks of metal of different weights and hues on a silk covered counter. She ran her fingers over the shiny smooth surfaces.

“What do you seek, madame?” the one-eyed proprietor asked.

He nodded and asked, “Steel for cookware?”

“For a sword,” Kahna told him. “Your finest quality.”

The one-eyed man bowed his head in acknowledgement and went to the rear of his stall. He returned several moments later, a silvery bright steel ingot dancing with the light of the torches.

“My finest,” he said in a voice as smooth as his wares. “Strong, guaranteed to hold an edge.”

“If I may,” he continued, “I could recommend a swordsmith of some skill who could craft a fine weapon from such a....”

“My husband is a smith,” she said, wondering who was speaking.

The one-eyed man said, “Of course.”

Malasa slept in the hay of her husband’s brother’s stables and rode out at first light. The block of steel was wrapped in oilcloth and stowed safely in her saddlebag.

Midway through her journey, her horse plodding without guidance along the westward road, she understood what that piece of steel meant. It was her decision. The moment Kahna awoke in her mind, she knew she would have to make the choice.

Wife of a country smith or consort and companion of the Lord of the House of Ghehan, Highest Priest of the Worship, Lord High Mage of Atlantis and the First City, Counselor to the King of the Twelve Houses.

Kahna could not see that there had really been any choice at all.
Posted by Paul Kupperberg at 4:21 AM