I AM a Tie-In Writer! 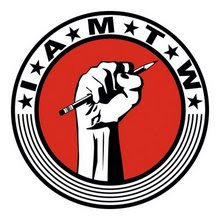 As the little glyph off to the left (and above, in this post) shows, I'm a proud member of the 150+ member strong IAMTW, the International Association of Media Tie-In Writers. We're the gals and guys who write novelizations and original books based on movies, TV shows, video games, comic books, and other media properties. Among are number are such bestselling authors as James Rollins, Max Allan Collins, Donald Bane, Jeff Marriotte, Raymond Benson and Nancy Holder.

Like all such groups, we hand out awards, in our case, the Scribes, honoring excellence in licensed tie-in writing. 2009 marks the third annual Scribes, nominees for which were just announced by our fearless leader and co-founder, Lee Goldberg. The winners will be announced at a ceremony at Comicon in San Diego in July.

Grandmaster Award
The highest honor the IAMTW can bestow is the Grandmaster Award, which recognizes a writer for his or her extensive and exceptional work in the tie-in field. This year's honoree is Keith R.A. DeCandido. He has written over thirty novels, most of them original tie-ins or novelizations. His work includes many Star Trek novels, as well as original books in the CSI: NY and Supernatural tie-in series, to name just a few.

Congratulations to all our nominees. I urge you to run right out and pick up as many of the above mentioned books as you can lay your hands on. As a judge in the Best General Fiction Adapted category, I can tell you there's not a bum read in the lot! I'm proud to call some of these people friends and honored to be considered a colleague by the rest.

You're also invited to check out website and learn more about the organization and the many fine people who fill its ranks.

Posted by Paul Kupperberg at 10:18 AM