It's exactly one month and a day shy of the fifth anniversary of the death of Julius Schwartz, legendary comic book editor, science fiction agent, bon vivant, and a dear friend. I don't remember exactly when I first met Julie, but I had to have been a kid (I started hanging around the DC offices around 1970, when I was 15) and he was, no doubt, the scariest editor I had ever seen. He was Perry White and when the man growled, his writers and artists jumped. I distinctly remember freezing at the typewriter the first time I wrote anything for him; it must have turned out okay because, years later, I was writing a steady stream of stories for him for Superman, Action Comics, DC Comics Presents, Supergirl and Superboy, and, in his retirement years, on his weekly visits to his Editor Emeritus office on the 6th floor at 1700 Broadway, we became even faster friends. When he died, February 8, 2004, I felt as though I had lost a grandfather. I keep a little reminder of him, on a bookshelf near my desk. 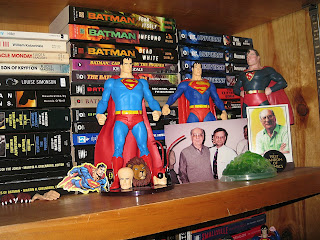 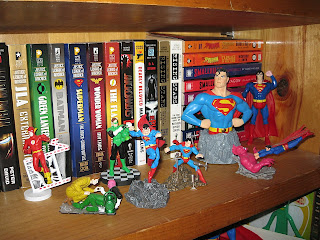 A few months after his death, I started this short story, but I could never quite work out how to get where I wanted with it: Julie Schwartz saves the world from alien invaders. Maybe one day I'll work it out...

PLOT HOLES
© Paul Kupperberg
Late in the afternoon, after his homework was done and his chores completed, 11-year old Julius climbed up the stairs from the third floor tenement apartment he shared with his mother, father, and baby sister to the tar-paper covered roof. In one hand he held a rare treat, an ice-cold nickel bottle of Pepsi-Cola. In the other was an issue of Amazing Stories, a magazine with a shiny, brightly colored cover and thick with coarse, off-white pulp pages. The moment he had seen the magazine with its painting of a monstrous serpent-necked sea creature about to swamp the crude raft on which were perched three frightened men in his friend Charlie’s hands, he knew he had to have it. It was so different from the books and magazines he usually read, the sporting adventures of brothers Dick and Frank Merriwell, the detective stories about Nick Carter, the light-hearted fantasy and fairy tales of the Blue Fairy books he borrowed from the hushed stacks of the New York Public Library, something utterly irresistible.

He pushed open the rooftop door on its squeaking hinges and stepped into the warm, late spring air, just as quickly closing it behind him. It had cost Julius two Merriwell boys and one Nick Carter book for this new prize, but he felt it was going to be worth it. Besides, he had read those books, cover to cover, numerous times. He already knew how Dick and Frank won the big game, how Nick Carter tricked the murderer into confessing to his crime. The sea monster, on the other hand, was something altogether new. Where had it come from? Who were these men? And, there, in the lower right hand corner of the illustration, was that the head of a giant turtle poking up out of the water? What was going on here?

He had made the trade, haggling with Charlie for almost half an hour before the other boy relented, then begged off the game of stickball that was forming outside the building on Caldwell Avenue. He couldn’t wait to get up here, to the roof, to his special, private place where he could always find the peace and quiet to read and open the brilliant red and blue cover of this special magazine and dive into the secrets its stories would reveal to him.

Amazing Stories, it said, in large white letters that splashed dramatically across the background red sky. June, 1926. 25 Cents. A whole quarter for a magazine! Imagine that. He could buy so much for so large a sum, penny candy enough to feed the entire block! An entire day at the movie theater...five trips to anywhere in the whole city, the Bronx, Manhattan, all the way into Brooklyn even, on the trolley or the subway!

And, here, just under the title, in small, neat type, these mysterious words:

Hugo Gernsback
Editor
Julius didn’t know who Hugo Gernsback was, nor what an “editor” was. Maybe the person who owned the magazine? He knew what an author was. They were the people who wrote the stories, for which their names were displayed on the cover, like Burt L. Standish, who wrote the Merriwell boys stories. Like there, on the magazine’s lower right corner, “Stories by H.G. Welles, Jules Verne, Ellis Parker Butler.” He had seen books by these names in the library. But “editor.” That was new to him. Maybe papa would be able to explain it, or he would look it up in the dictionary at school tomorrow. Whatever it was, he was sure it had to be important to warrant so prominent a position.

Julius settled on the overturned wooden cheese crate that served as his seat up here in his quiet retreat, his back against the brick chimney stack. He set the Pepsi carefully on the ground, then, wiping the moisture on his hand from the bottle on his trousers, opened the cover of Amazing Stories. The stories were all listed on the contents page, all featuring titles that were, as promised, amazing: “A Trip to the Center of the Earth,” “The Coming of the Ice,” “The Scientific Adventures of Mr. Fosdick: Mr. Fosdick Invents the ‘Seidlitzmobile’,” “The Star,” “Whispering Ether,” “An Experiment in Gyro-Hats,” “The Malignant Entity,” “Doctor Hackensaw's Secrets: Some Minor Inventions,” and “The Runaway Skyscraper.”

Julius didn’t know what a “Seidlitzmobile” might be, and, frankly, “Gyro-Hats” sounded downright silly, but a runaway skyscraper...how in the world could a skyscraper, one of those impossibly tall buildings that filled Manhattan, go anywhere? Blinking rapidly behind the lenses of his wire frame glasses in anticipation, Julius flipped through the pages in search of this intriguing title.

“The Runaway Skyscraper.” By Murray Leinster.

“The whole thing started when the clock on the Metropolitan Tower began to run backwards,” Julius read and, sucking in a deep breath that he only remembered to release a few paragraphs later, he didn’t look up from the pages of Amazing Stories until he had read through that remarkable story. Twice.
Posted by Paul Kupperberg at 8:48 AM

Hugo Gernsback was a one of a kind person. If you want to know more about him....

I’ve recently published a new 900-page biography about the life and times of Hugo Gernsback. It is available on Amazon. Just follow this link:

The manuscript was found while I was in the process of closing down Gernsback Publications Inc. in 2003. It was apparently written some time in the 1950’s. It covers all the areas that Hugo found interesting: wireless communications, science fiction, publishing, patents, foretelling the future, and much more.

Thanks for the info! I've always found Gernsback to be a fascinating character but know remarkably little about him other than what other people have commented on. Sounds like this is worth checking out.