Everybody else is having a holiday sale, so why shouldn't I? I've lowered the price of my novel, The Same Old Story on Amazon.com for the Kindle to 99¢. I hope you'll take advantage of my holiday-induced genorosity. 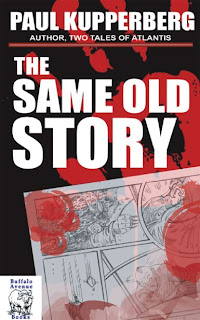 It's 1951 and the comic book industry is undergoing a recession that's sent half the writers and artists in New York to the streets scrambling for the work that remains. Among that number is writer Max Wiser, former pulp scribe and son of a legendary N.Y.P.D. homicide cop, on whose life Wiser based his bestselling pulp stories. When the industry's top writer dies in an accidental drunken tumble from a subway train that proves to have been murder, Max is plunged into a world of lies and conspiracy...discovering that there is often a fine line between real life and the pulp fiction around which he has built his life. Especially after the beautiful blonde mistress of the murdered man works her way into his life...and as the death toll mounts, Max Wiser learns that even in the cliche-ridden world of comics and the pulps, there's really no such thing as The Same Old Story...
Posted by Paul Kupperberg at 9:51 AM

Thanks for the sale! I purchased it, and hope to read it soon!