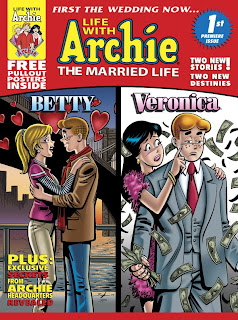 Archie Comics had such success with their "Archie Marries..." storyline in Archie #600 - 606 that they decided to continue the stories in an ongoing series. Michael Uslan (comic book fan/historian/writer and producer of the Batman film franchise, among others), who originated the idea and wrote the miniseries, was unable to stay on as writer due to time considerations, and, with only a handful of short stories for the regular Archie titles under my belt, editor-in-chief Victor Gorelick tapped me to write the new series (after the first stories were written by Uslan).

Now, according to the story on CBR: ":With the storyline generating renewed interest in the Riverdale brand around the world, Archie Comics recently announced a new magazine containing two brand new storylines launching in July: The Married Life: Archie Loves Betty and The Married Life: Archie Loves Veronica." Michael wrote a series bible for the first six issues, and, even as we speak, I've begun working out the story beats for issues #7-12.